Siem Reap, literally means the “Defeat of Siam” and commonly refers to the 16th century victory that solidified the Khmer kingdom, is the capital city of Siem Reap province in northwestern Cambodia, 300km north of Phnom Penh. Its close proximity to the world famous temples of Angkor has turned the city into one of the world’s premier destinations with more than one millions travelers come here every year. Siem Reap ranked fourth in the World's Best Cities of Travel and Leisure survey in 2014.

Today, Siem Reap is a vibrant city with modern hotels, restaurants, bars, clubs, and a bustling night market. It has colonial and Chinese-style architecture in the Old French Quarter, and around the Old Market. There are museums, traditional Apsara dance performances, a Cambodian cultural village, souvenir and handicraft shops, silk farms, rice-paddies in the countryside, fishing villages and a bird sanctuary near the Tonle Sap Lake.

Siem Reap has a tropical wet and dry climate. It is generally hot year-round with average temperature hardly falling below 30 °C in any month. The wet season lasts from April to November with high temperatures and high humidity. The best time to travel is in the dry season which fills the rest of the year. During this time, the weather is most comfortable with moderate temperature and the sun shines most of the day.

Siem Reap International Airport is 7km from the town center. A new airport is planned 60 km from Siem Reap.

It’s possible to get to Siem Reap from Bangkok via Poipet by bus and minibus which often take around 6 – 10 hours, or by train via the Aranyaprathet station to the border with Cambodia then take buses or taxi to the city center.

Angkor Wat
Angkor Wat is the largest religious monument in the world built by the Khmer King Suryavarman II in the early 12th century. Dedicated to Vishnu, it is the only one to have remained a significant religious center since its establishment. Angkor Wat has become the official symbol of Cambodia, appearing on its national flag and is the nation’s prime draw for visitors.

Covering an area of 162 ha, Angkor Wat, about 5.5km north of Siem Reap, is a unique combination of the temple mountain and the later plan of concentric galleries. The temple is the earthly representation of Mount Meru, the home of the gods: the central quincunx of towers symbolizes the five peaks of the mountain, and the walls and moat symbolize the surrounding mountain ranges and ocean

As the temples of Angkor represent a sacred religious site to the Cambodian, so you should dress modestly when visiting.

Angkor Thom
Angkor Thom was the last capital and most enduring capital city of the Khmer empire. It was founded in the late 12th century by King Jayavarman VII. The city covers an area of 9 square kilometers, enclosed by an 8m high wall and flanked by a moat. There are gates at each of the cardinal points, from which roads lead to the Bayon at the center of the city. Angkor Thom is famous for its face-towers at its gates as well as at the central Bayon temple. They become the symbol of Angkor and the ancient Khmer culture. Within the city are located several monuments from earlier eras as well as those established by Jayavarman and his successors. With many temples and sites to cover, visitors should set aside a half day to explore Angkor Thom in depth.

Tonle Sap Lake
Tonle Sap Lake covers an area of more than 10,000 km2, the largest fresh water lake in Southeast Asia. The lake is an important source of work to the inhabitants of the surrounding five provinces. It is a heavily populated area with more than three million of population earning a living by catching fish and working in agriculture. The lake is located about 15 kilometers south of the Siem Reap town; you can start your journey from Siem Reap to Phnom Penh by express boat, crossing the lake and dock at the village of Chong Khneas

Banteay Srei
Banteay Srei is considered the finest example of Angkorian art. It was originally erected as a Hindu temple in honor of Shiva, and was built largely of red sandstone allowing the elaborate decorative carvings surrounding the temple walls.

Angkor Borei
Angkor Borei could be the center of the oldest civilization in Southeast Asia. Located about ten kilometers from the Vietnamese border this is a “must” stop on your journey through Cambodia. Angkor Borei features a small archaeological museum with exhibits of Funan- and Chenla-era artifacts.

Beng Mealea
Beng Mealea or Bung Mealea which means "lotus pond" is a temple built as a Hindu temple in the 12th century in the Angkor Wat style. It is located 40 km east of the main group of temples at Angkor, on the ancient royal highway to Preah Khan Kompong Svay.

Rolous Group and Small Circuit
Roluos Group was the capital of Indravarman I (877 to 889). The monuments of Roluos are located 13 km from Siem Reap. This group consists of Preah Ko, Bakong and Lolei. Built during the reign of Indravarman I, in the late ninth century, Roluos Group are the first temples "hard" built by the Khmers and represent the beginnings of classical architecture and art in Cambodia

Kulen Mountain
Phnom Kulen, meaning Mountain of Lychees, is about 48 kilometers north of Siem Reap. The place is considered by Khmers to be the most sacred mountain in Cambodia and is a popular place for domestic visitors during weekends and festivals. About 20 minor temples are found around the area.

Opened on 2007, the Angkor National Museum offers visitors a better understanding of the area's archaeological treasures. The Golden Era of the Khmer Kingdom is presented, including the use of modern multimedia technology. The museum covers Khmer history, civilization, and cultural heritage in eight galleries.

The Old Market in between Pub Street and the Siem Reap River offers a good range of souvenirs for tourists, and goods and necessary items for the local.

Night market (the Made in Cambodia Market) is where all the products sold are made in Cambodia. It also hosts daily shows and other animation.

No trip to Siem Reap is complete without sampling authentic delicacies such as fish amok, lok lak (stir fried beef), and insect-based dishes for the adventurous diners. You can easily find these food at local markets, roadside vendors, and upmarket Khmer restaurants within the town center.

This simple yet popular Cambodian breakfast includes grilled thin sliced pork and broken rice. The dish is served with a side of pickled, slightly sweet cucumber, carrot, ginger and daikon and a small bowl of chicken broth with scallions and fried onions. Bai sach chrouk is sold in roadside food stalls and local markets in downtown Siem Reap for less than US$1.

Fish amok is freshwater fish fillet that’s steamed with curry in banana leaves, resulting in a soft mousse-like texture. Thick coconut cream and kroeung, a Khmer-style curry paste made from garlic, lemongrass, turmeric root, Chinese ginger, kaffir lime, shallots, and galangal are added to create a fragrant flavor for the dish. Fish amok is traditionally eaten during the Water Festival, but travelers can enjoy this classic dish any time of the day at local restaurants in the town.

Lok Lak is a traditional Khmer dish which is basically stir-fried beef slices in a light brown sauce, served with rice and fresh lettuce, tomato, red onion and cucumber slices. To create a distinct flavor, beef is marinated before cooking with a unique mix of fish sauce, soy sauce, lemon, pepper and oyster sauce. If you don’t like beef, you can ask local restaurants use venison, pork, chicken or tofu instead.

This curry doesn’t have spicy taste despite its red color. The coconut milk-based dish features beef, chicken or fish, eggplant, green beans, potatoes, lemongrass and kroeung, a Khmer curry paste made with lemongrass, galangal, kaffir lime zest, and turmeric. It is traditionally served at special occasions in Cambodia such as weddings, family gathering and holidays like Pchum Ben, or Ancestor's Day, where Cambodians make the dish to share with monks in honor of the departed. Khmer red curry is often eaten with bread.

Lap Khmer is the Cambodian version of Latin America’s ceviche. The dish features thinly sliced beef “cooked" ceviche-style by marinating with lime juice, lemongrass, shallots, garlic, fish sauce, Asian basil, mint leaves, green beans, and green pepper. Due to its contrasting flavors, this dish goes well with a plate of white rice and fresh chilies if you prefer it to be spicy. To have an authentic lap Khmer salad, you should visit local markets as at restaurants, it’s generally served grilled beef.

Nom banh chok, similar to Vietnam’s pho, is typically enjoyed as a breakfast food. You’ll find it sold in the mornings around markets by local women carrying it on baskets hanging from a pole on their shoulders. The dish contains rice noodle topped with a fish-based green curry gravy, mint leaves, bean sprouts, green beans, banana flower, and cucumbers. On special occasions such as weddings and religious festivals, locals usually replace nom banh chok’s green gravy with red curry sauce.

Samlor machu kroeung is typical dinner soup with sweet and sour taste. This dish has diced beef ribs and succulent tripe that are stewed in kroeung paste, lemongrass, turmeric, morning glory, and coriander leaves. Peanuts are sometimes added to the ensemble, resulting in a tangy and nutty flavor. At restaurants, people serve samlor machu kroeung with rice and chili flakes.

Samlor Korko is one of the most popular traditional Khmer dishes. It was originally a royal dish before became popular in public. Locally known as stirring soup, it is spicy fish-based soups with many vegetables. The dish contains kroeung, fermented fish, pounded rice, pork or fish, and vegetables such as pumpkin, green papaya, green banana, long beans, eggplant, and bitter gourd leaves. Samlor karko has best flavor when it is served hot

In Khmer, “samlor" refers to soup and "machu" means sour. This kind of soup is very popular for a filling lunch or dinner. The main ingredients are fish, water spinach, garlic, lemongrass, celery, tamarind juice, bean sprouts, and pineapple. It is seasoned with sugar, fish sauce and salt. Eat like a local by piling fresh herbs and chilies on top of your bowl. 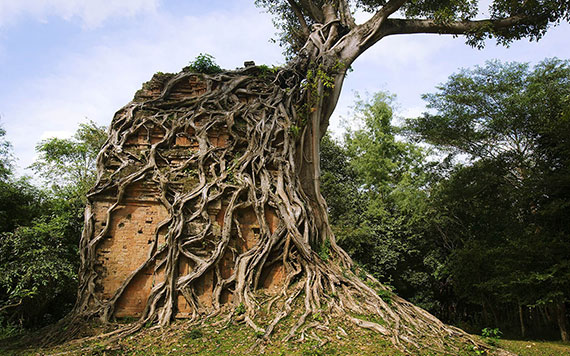 1
Days Siem Reap – Full Day Beng Mealea And Banteay Srei With Lunch
Type: Historical & Cultural | From: $79 pp
This trip is an amazing itinerary to behold. Explore the temples of the Khmer... 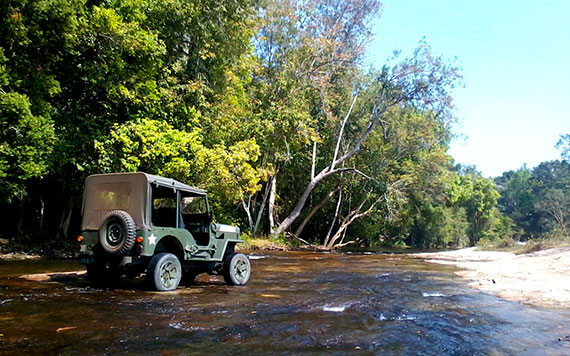 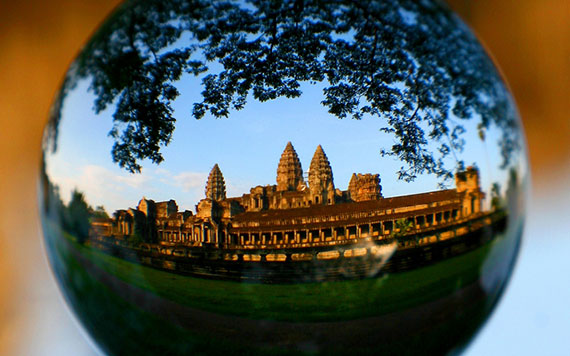 1
Days Siem Reap – Fullday Angkor Tour With Lunch
Type: Historial & Cultural | From: $52 pp
Guidebooks often recommend spending at least three days to get the most out of...

0.5
Days Siem Reap – Enjoying Dinner With Apsara Dancing
Type: Historial & Cultural | From: $26 pp
Your visit is not completed without Apsara dance that is depicted on the walls...
Simply express your tour needs, we'll customize a trip plan for you. No deposit is required
until you are totally satisfied with the trip plan.
Free call +84 - 24 - 3835 4899
Create your trip now
❅
❅
❆
❅
❆
❅
❆
❅
❆
❆
Privacy Policy | © 2015 365Travel.asia. All rights reserved
Member of