Located in Quang Ninh province in the northeastern Vietnam, Halong is approximately 1,553kmkm in size with 2,000 islands and islets. The bay was formed by 500 million years of geological creation and changes which now are visible in a dense cluster of rocks and islands topped with jungle, some are filled with enormous caves, and some have beautiful beaches. Another unique feature of the bay which is known by few is the abundance of enclosed lakes in some islands. All these island lakes occupy drowned dolines within fengcong karst.
Like many other Vietnamese names, the name of Halong also carry its own story. A long time ago, a family of dragons was sent to the Earth by the Jade Emperor to help the Vietnamese defend their newly-built homeland against the northern invaders. The Mother Dragons and her child spat out jewels from their mouths which then turned into islands and islets. These island linked together to create a solid wall that blocked the approaching enemy ships. After defeating the invaders, the dragons were attracted to the peaceful landscape and decided to stay rather than return the heaven. Where the Mother Dragon landed is known as Halong (Descending Dragons), and where the child descended is Bai Tu Long Bay.
Tourists come to Halong not only have chance to witness one of the wonders of Mother Nature but also visit a one-of-a-kind open air geological museum that has been preserved for millions years.

When to go
Halong has a tropical coastal climate with two seasons. A hot and humid summer lasts from May to September with the average temperature from 25 - 35°C. In summer, there is frequent rainfalls, even unpredicted storms that might cancel your trip. And the winter comes from November to March which is cold and dry, the average temperature from 12-20°C.
It’s possible to visit the bay all year round though the periods of March to April and October to November seem to be the most suitable time. There are blue skies aplenty, temperature are moderate and the sea is calm. Foreigners tend to travel Halong in winter whilst summer is the domestic tourist season.
There may have some unexpected situations that lead to your trip cancelation, Halong is definitely a place you must visit at least once in your lifetime.

Getting there
Getting to Halong Bay is easy and convenient.
By private car, shuttle bus or bus:
Car is the most popular transport to visit the bay by road, which follows Highway 18 passing Tuan Chau Island, Bai Chay Road and Hon Gai Bridge. Most cruise boats have shuttle bus from Hanoi to the pier for guests. Travel time without traffic will take about 4 hours per way.
Budget travelers can get a bus from Hanoi Gia Lam car park to Mien Tay car park in Bai Chay, Halong. The price is about USD$3.
Train
Train from Hanoi departs for Halong Bay at 7:00am and arrives at Halong train station around noon. On return, the train departs at 3:00pm to back Hanoi at 8:00pm. However, using train is not convenient and takes longer time than car.
Helicopter
You can also travel to Halong on helicopter which takes about 1.5 hour from Hanoi and is quite a costly option. The helicopter used is MIA-17 (24 seat) and MIA -8 (12 seat), produced by Russia. This service is exclusively run by Northern Vietnam Helicopter Company.
Halong Bay cruise
A cruise on the charming bay is a must for any visitors as it takes you closer to the limestone karts and natural grottoes. There are myriads of boat cruises for you to choose from. Some offers day trips, other overnight or charter, the prices also vary.
Another choice is take a seaplane tour from Hanoi, this option allows you to get a bird’s eye view of this marvel of nature. The seaplane takes off from airport in Hanoi and lands off at Tuan Chau Marina after 45 minute flight. Visitors have 15 minutes scenic flight over the UNESCO Heritage Site. This will be an experience like no other.

Lan Ha Bay
Geologically, Lan Ha is an extension of Halong Bay to the south but belongs to a different province. The bay has about 400 karst islands and limestone outcrops which are just as stunning as those of its neighbor. However, the bay is far more pristine plus with many small desert beaches and a diverse ecosystem of around 200 species of fish, 500 species of mollusc, 400 species of arthropod, coral reef, while larger marine animals in the area include seals and three species of dolphin. Just a 30 minute boat ride from Cat Ba Island, Lan Ha is considered to have the best water quality for snorkeling, diving and good conditions for a rock-climbing.

Titov Island
Located in the heart of Halong Bay, about 8km southeast of Bai Chay Harbor, Titov Island is one of the most-visited sites by both foreigners and locals alike. The island is named after the Soviet cosmonaut Gherman Titov on the occasion of his first visit to Halong in 1962. Titov draws a huge number of visitor thanks for its heavenly manmade beach with clean water, smooth white sand that creates a great place to relax.  Top of the island provides a vantage point for a panoramic view of the bay.

Thien Cung cave
Thien Cung (or Heavenly Palace) cave is in the southwest of the bay, 4km from Dau Go Island. Often referred as the most beautiful primitive grotto of Halong, Thien Cung is about 10,000 square meters in size with a unique system of stalactites and stalagmites in distinct shapes and sizes. Explore the cave’s rocky cliffs is not an easy task as you have to go through a hazardous path covered with thick forests following a narrow gate. Inside, you will be wowed by the very animated and splendid stalactites. The further you walk, the more beautiful formation of stalactites come to your eyes.

Surprise Cave
Sung Sot cave is on Bo Hon Island. In 1903, the French firstly discovered the cave and named it “Grotto de la Surprise” (The cave of Surprise) which was shortened to Surprise afterwards. The cave consists of two chambers linked by a narrow passage and filled with unusual rock formations which are illuminated by multicolored lights.
For many people, the inner space of the cave looks like a large theater created by Mother Nature. The 30m ceiling is decorated with stalactites like colorful chandeliers and the floor with plenty of rocks in diverse shapes. The further you go into, the more interesting shaped rocks come out. Some says that the cave can also be called Cave of Unfathomable Depth. Look for stalagmites and stalactites in the shape of young couples, a multitude of animals and even the Virgin Mary.

Dau Go Cave
Dau Go (or Wooden Stakes) cave on the same name island is the largest grotto in the area. The cave interior is approximately 5,000 km2 in size with hundreds of stalactites falling down from the ceiling like a waterfall. To reach the cave, visitors must ascend 90 steps. Inside, tourists will discover a magnificent world of stalactites and stalagmites which are the result of karst formation for a long period.
There are several versions of the origin of the cave’s name. The most convincing one is linked with the historic battle against Mongolian invaders under Tran dynasty in 13th century on Bach Dang River by deploying booby traps of giant steel-tipped wooden stakes beneath the water. These stakes created a trap to destroy the enemy’s ships. Later on some of wooden stakes flow to this cave and was discovered by local people. From then, it was called “Dau Go”.
Dau Go Cave is proudly listed in Merveille de Monde, a famous tourism book about the most beautiful and worth visiting tourist attractions in the world.

The Kissing Rocks
The Kissing Rocks, also known by the tourist euphemism "The Kissing Cocks", is considered the symbol of the Bay. Located in the southwest part of Halong, the two 10 meter high islets look like the image of two chicken being in love. While to some others, these rocks seem fighting each other, the name Kissing Rocks is still preferred. That rocks have been facing each other for probably hundred thousand years, like an eternal love. And you can find this image on the 200,000 Vietnamese Dong note.

Kayaking
Kayaking among hundreds of islands is simply amazing. It provides a different view on beautiful Halong as it goes where big boats cannot and allows visitors get closer to limestone towers, paddle through islets, and visit hidden caves, lagoon, and unspoiled beach.

Other activities
Swimming, diving and kayaking are other water sports that you can take part in. Many operators close to the bay and cruise itself offer equipment on rent for these adventure activities.
Squid sausages - Halong’s most famous dish
It is said no kind of squid can make the sausage as wonderful as Halong Bay’s squid. It must be the fresh, newly-caught squid so as to create a sharp, distinct and appealing flavor. Squid are grinded by hand deftly, shaped in round small pieces then fried in oil until it turns crispy and golden brown. The dish is served with peppered fish sauce. The sweet fatty squid sausage married with savory sauce will really tease your taste buds.

Sea snails
Sea snails in Halong vary in types and different cooking methods. Fried sea snails with chili sauce is the most common dish.  This steaming dish is a celebration of spicy chili sauce, fatty snails and typical aroma of Vietnamese herbs like coriander leaves, lime leaves and dried coconut. With only one bowl of sauce made from fish-sauce, ginger, peppers and lemongrass, each type of snails with different unique flavors and different ways to enjoy would make anyone’s mouth water.

Other Halong specialties
Ngán: a mollusk species which is popular in the coastal region but only in Halong where Ngan gets its fame. Ngan is best enjoyed when grilled or steamed, with a salty taste at first then turn into a sweet flavor. However, the most famous dish is Ngan wine, a mix of strong liquor with its blood. Visiting Halong, visitors can also enjoy other dishes from this seafood like ngan sushi, ngan salad, and soup.
Hoanh Bo rice wine is a local drink of Halong. It is made from the unique sticky rice of local people. Rice is cooked and fermented. Then people put the fermented rice in a jar full of liquid made from special leaves in Hoanh Bo forest. 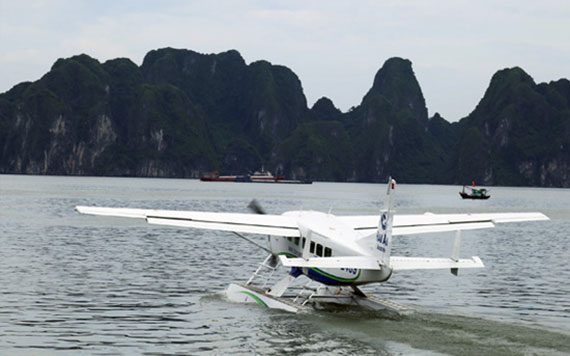 1
Days Oneway Seaplane Hanoi To Halong With 15 Minutes’s Scenic
Type: Private Tour | From: $416 pp
This is a great combination of one-way transfer by seaplane to Halong Bay with... 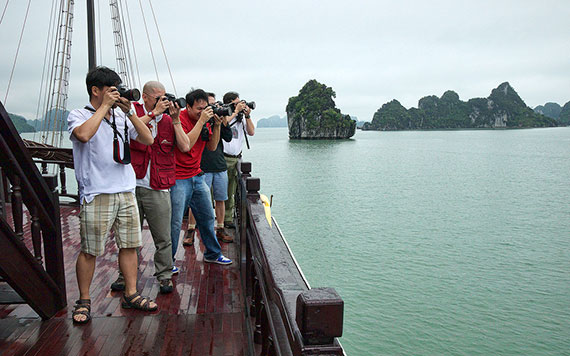 3
Days Halong Amazing Photo Shoot On Private Cruise
Type: Private Tour | From: $544 pp
Halong Bay is a must see when visiting Vietnam. Anywhere you look, it is a... 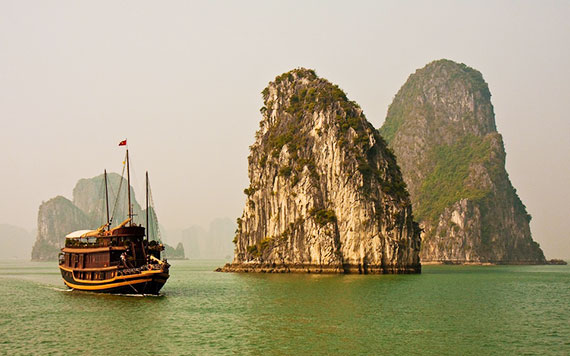 4
Days Hanoi, Halong On Wooden Junk
Type: Private Tour | From: $257 pp
This 4 day trip features the charming capital of Hanoi with the very best...
Simply express your tour needs, we'll customize a trip plan for you. No deposit is required
until you are totally satisfied with the trip plan.
Free call +84 - 24 - 3835 4899
Create your trip now
Privacy Policy | © 2015 365Travel.asia. All rights reserved
Member of