Phnom Penh is the capital and largest city of Cambodia. Situated at the junction of the Tonlé Sap, Mekong and Bassac Rivers, the city takes its name from the present Wat Phnom (or Hill Temple) and the person who is believed to be the founder of the city, Lady Penh. Phnom Penh’s official name is “Krong Chaktomuk” which translates as “City of Four Faces” because the three rivers form an “X” where the capital is located. Today, Phnom Penh has grown to be the nation’s center of economic and industrial activities, as well as the center of security, politics, economics, cultural heritage, and diplomacy. More than two millions people call here home.

The city was first established as the capital of Cambodia in the 15th century under the reign of King Ponhea Yat, after Angkor Thom was captured by the Siam. However, it was not until 1866 that Phnom Penh became the permanent capital of the country. Under the French colonial era, it was known as the “Pearl of Asia” and one of the loveliest cities in Indochina in the 1920s. The city is noted for its beautiful and historical architecture and attractions, including a number of surviving French colonial buildings scattered along the grand boulevards.

When to go
Phnom Penh has a hot year-round climate with the temperatures often range from 22 to 35°C. The weather is divided into two different seasons which are subject to the tropical monsoons. The rainy season, which runs from May to October when the southwest monsoon blows inland bringing moisture-laden winds from the sea, sees high temperatures accompanied by high humidity. November to March is the dry season when the northeast monsoon shows in.

How to get there
Phnom Penh can be reached by international flights, domestic flights, border crossing or speedboat from neighboring countries.

Air
Phnom Penh International Airport, 7 km west of the city is the largest and most well-connected airport in the country. From here, you can transfer into the city center by car, taxi, tuk tuk or motorbike. International airlines that have flights to Phnom Penh including AirAsia, Jetstar Asia Airways, Qatar Airways, Vietnam Airlines, Bangkok Airways, Lao Airlines, Thai Airways. Domestic flights run between Phnom Penh and Siem Reap.

Bus
All major provinces in Cambodia have air-conditioned buses to Phnom Penh. There are buses between Phnom Penh and Ho Chi Minh City in Vietnam. The transfer takes around 6 hours one way.

Waterway
Boats from Siem Reap to Phnom Penh often takes 6 hours. From Chau Doc in Vietnam, it takes about 5 hours to reach the city. The city ferry port is located on Sisowath Quay, at Street 104, just north of the main riverfront park/restaurant area.

Wat Phnom
The Buddhist temple atop the only hill of Phnom Penh is the most important and tallest religious monument in the city. Local people come here to pay respect and pray for promotions and good test scores. They will leave offerings of fruit and flowers when their prayers are answered. Wat Phnom also is the center of celebration during Khmer New Year and Pchum Ben.

Royal Palace
The Royal Palace in Phnom Penh was constructed over a century ago to serve as the residence for the King of Cambodia, his family and visiting foreign dignitaries. It also served as a venue for the performance of court ceremonies and rituals.  Designed to reflect the wealth of the Kingdom, featuring a silver Pagoda, manicured tropical gardens, classic Khmer roofs and ornate gilding. Today, visitors are welcome to visit the Royal Palace, which is home for King Norodom Sihamoni and former King Norodom Sihanouk.

Silver Pagoda
Inside the Royal Palace is the extravagant Silver Pagoda - named after the solid silver floor tiles that adorn the temple building. The Silver Pagoda or Wat Preah Keo Morokat, which means 'The Temple of the Emerald Buddha’ is actually a series of structures and gardens. The principle building is the temple Wat Preah Keo Morokat, with other structures including a library, various stupas, shrines, monuments, minor buildings and the galleries. Inside the main temple you will find an extraordinary Buddha made of baccarat crystal seated atop an impressive gilded pedestal. Another impressive feature is a solid gold Buddha adorned with more than 2,000 diamonds weighing in 25 carats.

During the communist regime of Khmer Rouge, more than 17,000 people were killed in what has come to be known as the “Killing Fields”. This was later portrayed in the Hollywood movie of the same name. Today in this area there is a memorial and museum in remembrance to all the people that were executed. Admission to the Killing Fields includes an excellent audio tour, available in several languages, which includes stories by those who survived the Khmer Rouge

National Museum of Cambodia
The National Museum of Cambodia opened its doors in 1920 in a graceful terra-cotta structure in what is known today as ‘traditional Khmer’ architecture. The museum is home to the world’s finest collection of Khmer sculptures dating from the 7th to 20th century. Throughout the year, many national, as well as International exhibits are on display and a visit to the Museum is a magnificent experience where in to learn the history of Cambodia

River cruise
A boat trip along the rivers is an excellent way to get away from the busy streets to relax and watch the sunset. A journey often takes around 1-2 hours along the Tonle Sap River passing the Royal Palace and Phnom Penh skyline. Most river cruises start at Sisowath Quay, Riverside, at the corner of street 118. The price depends on the duration as well as the size of the boat.

Apsara dance
An Apsara dance performance should not be missed when you are in Phnom Penh. This traditional Khmer dance dates back to the 18th century but was nearly lost during the Khmer Rouge regime. Afterwards, the Cambodian Living Arts revived the art by gathering the surviving master artists to continue to perform and train the younger generations in traditional arts. National Museum and Chatomuk Theatre are two venues where visitors can see the performances.

Night Market
Night Market on the riverfront is a great place to sample some street food and to buy handicrafts, silks, art, clothes and souvenirs. Night Market in Phnom Penh is an open market, popular among Cambodians with a center where local artists entertain visitors with music and dance performances.

Cambodia's food is often all about the contrasts—sweet and bitter, salty and sour, fresh and cooked. It shares many dishes with its neighbors, and you'll find noodle soup similar to Vietnamese pho and sandwiches like banh mi, Thailand's refreshing salads and sour soups, Indian-inspired curries, and noodles and stir fries handed down from years of Chinese migration. From Cambodia's days as a French Indochina colony, there's a national love of coffee, pate, and good bread. Baguettes are served with soup, made into sandwiches, and sold by men riding bicycles carrying baskets of long loaves.

Fish Amok
This fish curry is often called Cambodia’s national dish, and for good reason—its presentation is beautiful and it tastes even better. Fish amok gets its signature flavor from kroeung, an aromatic curry paste made with lemongrass, galangal, fresh turmeric, shallots, garlic, and a little chili. The kroeung is mixed with coconut milk, which turns a beautiful golden yellow. Mild white fish and shredded kaffir lime leaves are added to the curry, which is steamed in a banana-leaf cup. Every restaurant prepares fish amok slightly different—some are saucier and others becomes custardy as they steam.

Morning Glory
This green vegetable grows profusely all over Cambodia in damp soil and watery patches near rice paddies. Sometimes farmers cultivate it, but more often people just find a patch and pick it to sell at the markets. Morning glory has hollow green stems, thin leaves, and a mild, grassy flavor that tastes similar to spinach. It appears in a variety of dishes, usually meaty soups like the one pictured here, and stir-fries with garlic, ginger or oyster sauce.

Bai Sach Chrouk (BBQ Pork and Rice)
One of Cambodia’s most popular breakfast dishes, and one that would be great all day if there was any bai sach chrouk left past 9 am. No two recipes are the same, but all feature pork marinated in garlic, soy, and coconut milk slowly grilled over charcoal, where it becomes smoky and caramelized. The pork is sliced thin, sprinkled with scallions and served over rice and fresh sliced cucumbers and green tomatoes, with a small bowl of gingery, lightly pickled cucumber, daikon, and green mango on the side. The best way to eat bai sach chrouk is to scoop a bite of pork, rice and pickle all together.

Green Mango Salad
Cambodians love mangoes and eat them at every stage of ripeness, and the greenest ones become shredded salad. Similar to Thai green papaya salad, Cambodian green mango salad is more refreshing and citrusy, and less pungent and spicy, with that same winning combination of sweet, sour, savory, and crunchy. Shavings of green mango are mixed with shallots and Asian basil and mint, and vegetables including carrots, red and green peppers, and tomatoes. The dressing is made with shallots, garlic, lime juice, fish sauce, palm sugar, and just a tiny bit of bird’s eye chili. A small portion of green mango salad often turns up as a relish with grilled fish and meats.

Khmer Muslim Beef Curry
This is what your Cambodian-Jewish grandma might make for holidays. Chunks of beef are cooked until spoon-tender in a red curry made from ginger, coriander, lemongrass, shallots, garlic, onions, cardamom and palm sugar. Some versions include peanuts, which soften as they cook in the sauce. Khmer Muslim beef curry is served with baguette for dipping—or for making a delicious, and very sloppy, sandwich.

Khmer Noodles / Nom Banh Chok
This dish is technically called nom banh chok, but locals and visitors alike usually just call it Khmer noodles. It’s sold by women who walk around carrying the ingredients in baskets hanging from a pole balanced across their shoulders. When you order Khmer noodles, they’ll stop, unpack everything and fix your bowl to order. Thin rice noodles, which are stored in their basket in a beautiful, flower-like spiral, are combined with handfuls of raw vegetables, including shredded banana leaf, bean sprouts, diced cucumber, and long beans, plus fresh mint and basil. The whole bowl is topped with thin, lemongrass-heavy green fish curry. When everything in the bowl is mixed, it’s as much salad as slurpable noodles. 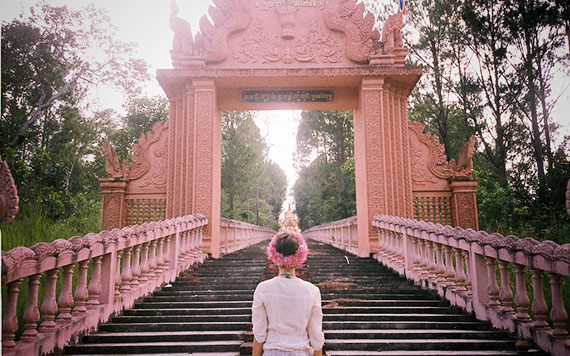 1
Days Phnom Penh – Fullday Kirirom National Park With Lunch
Type: Historial & Cultural | From: $66 pp
Get away from the crowds, this program will lead you through pine forests to... 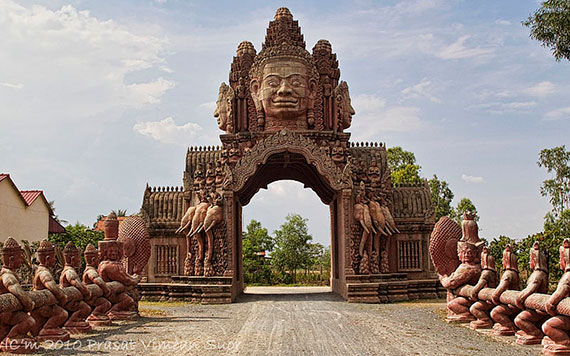 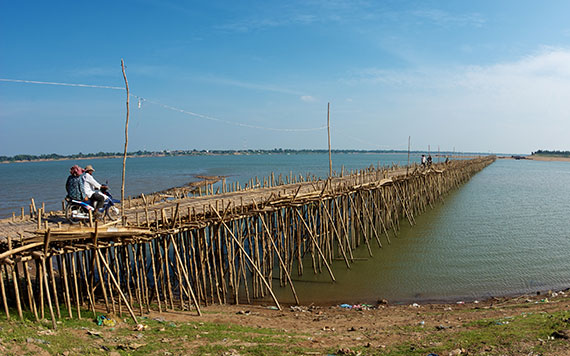 1
Days Phnom Penh – Full Day Kampong Cham – Chup With Lunch
Type: Historial & Cultural | From: $52 pp
The excursion offers you a perfect introduction to Kompong Cham city –...
Simply express your tour needs, we'll customize a trip plan for you. No deposit is required
until you are totally satisfied with the trip plan.
Free call +84 - 24 - 3835 4899
Create your trip now
Privacy Policy | © 2015 365Travel.asia. All rights reserved
Member of