Hoi An Travel Guide: Updated and Free Information and Tips in Hoi An

Hoi An, also Fai-Fo or Faifoo is perhaps Vietnam’s most delightful town. Once a major trading port dating from the 15th to 19th centuries. the town owes its easygoing provincial demeanor and remarkably harmonious old-town to happenstance.

Hoi An’s early history is that of the Cham.  It was known first as Lam Ap and later as Faifo, the commercial capital of the Champa Empire which occupied much of what is now central and lower Vietnam, from Hue to beyond Nha Trang until the 14th century. During this time, it developed into a prosperous trading port visited by trading fleets from as far afield as the Arabian Peninsula. After the Cham people moved to settle in Nha Trang, the Nguyen Lord re-established it as a trading port in 1595. Hoi An became the most important trade center in Southeast Asia in the 16th and 17th centuries, where foreign merchants came here from every corner of the world including the Japanese, the Chinese and the Portuguese. The majority of Hoi An's most beautiful architectures were built in this period.

Its importance began to fade at the end of the 18th century as trade slowly moved north to the larger and more industrial port of Da Nang, leaving the town a forgotten backwater. The result was that Hoi An remained almost untouched by the changes and wars to Vietnam through the next two centuries. Nowadays, it is one of Vietnam’s most wealthy towns with romantic riverside setting, a culinary mecca and important tourism center.

Hoi An has a calm mild weather throughout the year, with two seasons: rain and dry. The rainy season comes from September to January while the dry season fills the rest of the year. The average temperature ranges between 25 °C to 30°C with the hottest months are June, July and August. The highest recorded temperature is 38°C. Winter-like weather lasts from November to January, the weather is quite comfortable with temperature ranging between 19 to 24°C.

In monsoon season, there might be heavy showers which cause floods at times. As a result, the number of travelers come to town during this time decrease. Meanwhile, dry seasons is the best time to visit the town thanks to its mild and beautiful weather with low humidity, less rain and warm sunshine.

Hoi An has no airport, thus visitors have to fly to the nearby Da Nang International Airport which is about 35km away. From here, it takes about 40 minutes by car to the town. Some international flights are from Bangkok, Singapore Siem Reap, and Hong Kong. For domestic route, there are daily flights from Hanoi and Ho Chi Minh City to Da Nang.

There is no railway station in Hoi An, too. The nearest one is in Da Nang which have many domestic trains from Hanoi, Ho Chi Minh City, Hue and Nha Trang.

Buses from major cities of Vietnam to the town are available. For long-haul distance for example from Hanoi, it is often overnight buses. From Hue, it takes about 2.5 hours by car to get to the town. From Da Nang, city bus runs every hour from bus stations. Buses run daily from southern provinces such as Da Lat, Nha Trang, and Ho Chi Minh City.

This beautiful little bridge is emblematic of Hoi An. A bridge was first constructed here in the 1590s by the Japanese community in order to link them with the Chinese quarters across the stream. The entrances to the bridge are guarded by weathered statues: a pair of monkeys on one side, a pair of dogs on the other.

Located at 101 Nguyen Thai Hoc Street, Tan Ky House, constructed almost two centuries ago by a Vietnamese family, has been lovingly preserved through seven generations. The owner of the house has preserved its interior design and old furniture, as well as many relics of the prospering trade and cultural ex-changes among the Vietnamese, Chinese and Japanese during the late 17 century. While visiting the small town Hoi An, you must also visit this Old House of Tan Ky to encounter great Vietnamese historical and cultural significance.

Originally a traditional assembly hall, this structure was later transformed into a temple for the worship of Thien Hau, a deity from Fujian province. The gaudy, green-tiled triple gateway dates from 1975. The mural on the right-hand wall depicts Thien Hau, her way lit by lantern light as she crosses a stormy sea to rescue a foundering ship. Opposite is a mural of the heads of the six Fujian families who fled from China to Hoi An in the 17th century.

The museum was established in 1994, and displays a unique collection of artifacts from Sa Huynh culture, considered to be the first settlers of the port town, who cooperated and traded with countries in Southeast Asia, South India and China. This collection provides visitors with useful information about the ancient Sa Huynh culture’s inhabitants and is mostly related to burial customs, conceptions of life and death, the developmental history of the region, and relationships with other cultures. Of particular significance is a collection from Bai Ong, a site on Cham Island which traces Sa Huynh culture back by 3000 years. These collections are considered the largest and most unique collection of Sa Huynh artifacts in Vietnam.

The Museum of Trade Ceramics showcases the origins and history of the town and the region in the context of historic trade and relationships with foreign nations such as China, India, Japan, the Philippines and Thailand. The building housing the museum is itself an attractively restored traditional wooden house of Hoi An’s old quarter, which on account of design similarity and an historically significant local Japanese trading community is likened to those of Kyoto.

The site of Vietnam’s most extensive Cham remains, My Son enjoys an en-chanting setting in a lush jungle valley, overlooked by Cat’s Tooth Mountain (Hon Quap). Featuring about 20 structures of the most important intellectual and religious center of the kingdom of Champa it may have served as a burial place for Cham monarchs. It was rediscovered in the late 19th century by the French, who restored parts of the complex. My Son is today a UNESCO World Heritage site.

Tra Que is a small village located in Cam Ha Commune, 3km north of Hoi An. Tourists are often fascinated by watching the farming procedures of local farmers, including: raking the ground, sowing, watering, picking vegetables and many other activities. Moreover, tourists learn about the organic farming techniques and try their hand at actual farming. The farmers don’t use chemical or fertilizers, but a kind of algae found only in a lagoon in Tra Que. Thanks to this technique, Tra Que herbs and veggies are widely recognized for their quality, safety and especially for their outstanding taste and flavor.

Kim Bong Village is notable for its carpentry (including cabinet making and shipbuilding) and traditional woodworking products. Established in the 15th century, it reached its peak in the 18th century. The products had been used in many famous architectural buildings, including the Imperial capital in Hue.

A breathtaking cluster of granite islands set in aquamarine seas, around 15km directly offshore from Hoi An, the Cham Islands make a wonderful excursion. Until very recently they were closed to visitors and under close military super-vision, but it’s now possible to visit as a day trip, dive or snorkel the reefs, or stay overnight.

Cua Dai beach offers an unrivaled seaside escape from the ancient streets of Hoi An. This 3km stretch of fine white powdery sands is positioned just north-east of Hoi An, making it the perfect place to easily find your own patch of paradise. The water is very clear with tropically blue waves that are gentle enough for swimming and floating around. There are even changing huts on the beach along with a few bungalows here and there.

With access to fresh agricultural products and a long culinary tradition, Hoi An is a top spot for a cooking class. Many restaurants here offer these class such as Morning Glory – one of the first cooking schools in town, and the Red Bridge which takes a pleasant river boat ride to get there.

As with other places in Vietnam, food in Hoi An is mouth-wateringly delicious and affordable. There are a number of local delicacies with worldly influences specific to the town that can persuade one stick around for a while. Prepare yourself for a gastronomic delight of Hoi An.

Cao lau is perhaps Hoi An’s most famous dish. It is made with chewy, udon-like noodle served with pork slices, bean sprouts, crunchy rice crackers, Vietnamese herbs, pork broth and chili jam. Cao lau does not taste like any other dishes, but nobody can recognize it as being comparable to Chinese or Japanese cuisines.  It’s easy to find a place serving Cao Lau, from street-side stalls to restaurants.

It is a type of shrimp dumpling comprising of two small 2-inch diameter rounds of rice paper, with a dime-sized lump of meat filling right in the center. When the rice paper is steamed, the edges get soft and chewy and warp a little, making the dumpling look like a white rose.  Many people like these cakes not only for their delicious flavor but also for their beautiful shape. Nearly every restaurant offers this dish as do plenty of street-side and market stalls.

Wonton is made with rice flour and filled with ingredients such as shrimps, pork, and eggs. There are three types of hoanh thanh: fried wonton, wonton soup and wonton noodle soup. All are served with fresh vegetables, bean sprouts and coriander.  You can dip it in soy sauce and chili.

Meaning ‘sizzling cake’, this dish has turmeric-infused batter that’s fried with shrimp and pork, and topped with beansprouts. It’s rolled in rice paper, ready to dip. 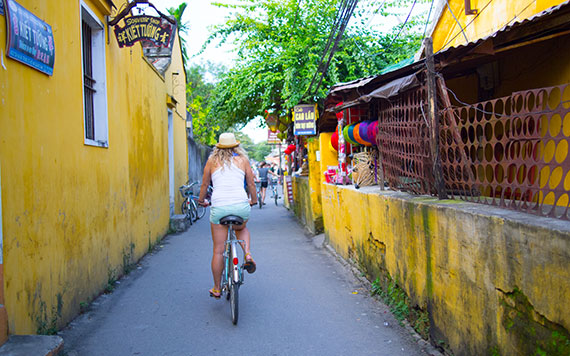 1
Days Biking In Hoi An & Tra Que Village
Type: Cultural & Active | From: $28 pp
Tra Que, the little village on the edge of Hoi An is famous for its sweet... 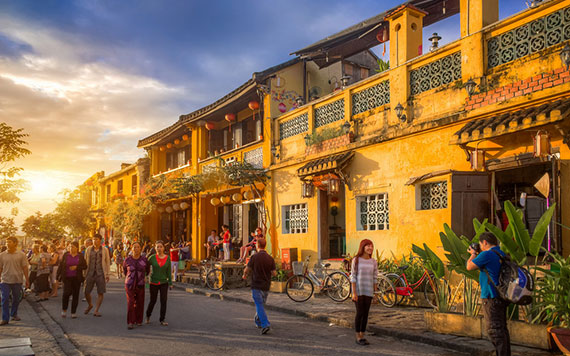 1
Days Full Day Hoi An Town – My Son
Type: Cultural & Historical | From: $23 pp
Combine a visit to the UNESCO-listed archeological site of My Son, with a... 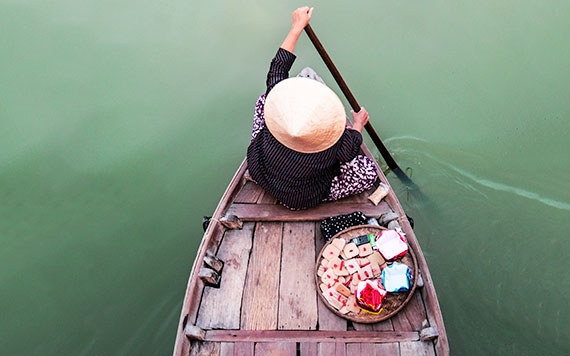 1
Days Full Day Hoi An Ancient Town
Type: Cultural & Historical | From: $18 pp
Discover the ancient city of Hoi An on a full-day tour of this UNESCO Heritage...
Simply express your tour needs, we'll customize a trip plan for you. No deposit is required
until you are totally satisfied with the trip plan.
Free call +84 - 24 - 3835 4899
Create your trip now
Privacy Policy | © 2015 365Travel.asia. All rights reserved
Member of